Windows 10 has a new Engine for Windows updates and unlike previous versions you cannot install or check updates specifically to Install.If not properly controlled,they would download on their own and install automatically.
This is not benificial for users like me who are on a low bandwidth.However we can control updates using Vishal’s great article here but still we cannot control and Install a specific update like Windows update.
Here in this article I would explain how to Install a specific update using powershell, a similar application like command prompt.SO without wasting time lets see how to accomplish this:

PART 1(Needs to be done one time only)

1. First of all download the Windows Update PowerShell Module from following link:
Windows update Powershell Module
2.Extract the above downloaded file and copy the contents/folders after Extraction.

3.Navigate to C:/Windows/System32/WindowsPowerShellv1.0Modules and paste the folder PSWindowsupdate there.Click continue when Prompted.
I have already done that so It is asking me to replace:

5.Now type the following command to change Execution Policy in Powershell that would be required to install the updates:

Press Y when you are prompted for change as shown:

6.Now we need to import the module required to install the updates into powershell, we just copied.To do this execute the following command:

We are done setting up.Now over to Part 2:

Part 2
To get the available list of updates,use the following command:
GET-WULIST
After sometime it will show you the results as shown:

For the Security update the command would be:
GET-WUINSTALL -KBArticleID:KB3132372
You would be prompted then to Install the update.Press “Y” when Prompted. 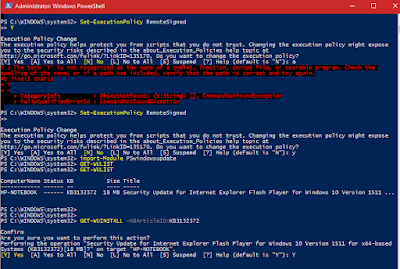 Now the update would be downloaded and Installed.
So the final screen would look like this: 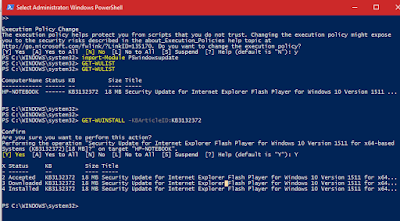 That’s it!
*Running Get-wuinstall without parameter would install all of the updates it finds.