Netmarket share has posted its statistics for the month of January earlier today, and it indicated some things that were expected and some that were not.

As usual the list topper was Windows 7, which is still way behind the second most used OS-Windows 10. Windows 7 stands at 47.25 last month. Though Windows 7 saw a small decline from 48 percent to 47.

One of the most amazing stats which are coming from a few months is Windows XP is still gaining(though I have a doubt who Installs almost a decade and a half year old OS with no security updates). Windows XP got 9.17 percent of the share-from 9.07 percent last month.
At the end we see the diagrammatical representation of shares: 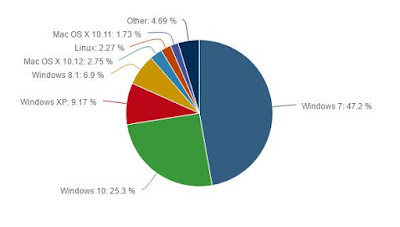 Windows overall powers >90 percent of the PCs as we can say.
Share