Since Windows 10 has released, Microsoft has released 2 Major upgrades if we exclude the RTM one. The first one was released in 2015 itself, 6 months after Windows 10 RTM was released. It was called November update and version number was version 1511. The next update, called the Windows 10 Anniversary update released in 2016, 1 year after Windows 10 was released( The name was given itself to mark the Anniversary of Windows 10). This was the first Redstone release.
Now, the Insider builds code named Redstone 2 are being distributed to public, and the production update would be called as Creators update due this spring most probably in April. Microsoft still has expansion for Redstone and company is planning Redstone 3 later this year. At this year’s Ignite conference in Australia, Microsoft has said the same and this was a pictorial representation of what was described: 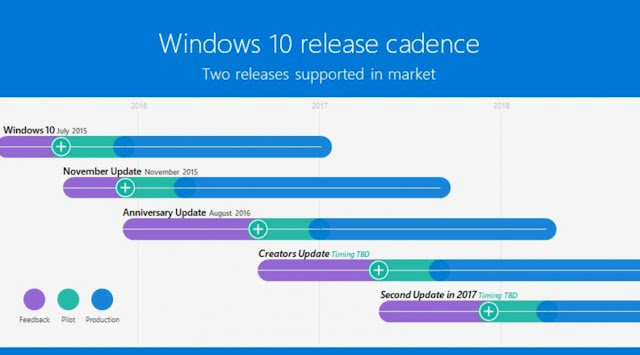 We expect Microsoft to talk about this Public release at Build developer conference which is scheduled in May this Year.
Also, this picture also depicts that two releases at a time would be supported in public release, and the previous one would retire as soon as new ring hits the production. We talked more about this here.
Share