Usually Microsoft releases updates to its products once a month-which is second Tuesday of each month called as Patch Tuesday. The updates on Patch Tuesday include security improvements together with general fixes. After the creators update was released, the Patch Tuesday also followed the same update release, with Microsoft releasing a patch that included both security and quality improvements.
This might change from now on, as Microsoft on the Technet has given hints to change this pattern. Now if we see the figure, there would be two updates in a month, the first one being Patch Tuesday that focuses on security and the other one later in the month focuses quality. Patch Tuesday would surely be happening, but we cannot confirm the date of the other update.

This link explains the same where Microsoft said on Technet:(Thanks to Neowin)

Based on feedback from customers, we are making some adjustments to the updates that we are releasing for Windows 10, version 1703 (also known as the “Creators Update”). With these changes, we will routinely offer one (or sometimes more than one) additional update each month. These additional cumulative updates will contain only new non-security updates, so they will be considered “Updates” in WSUS and Configuration Manager. 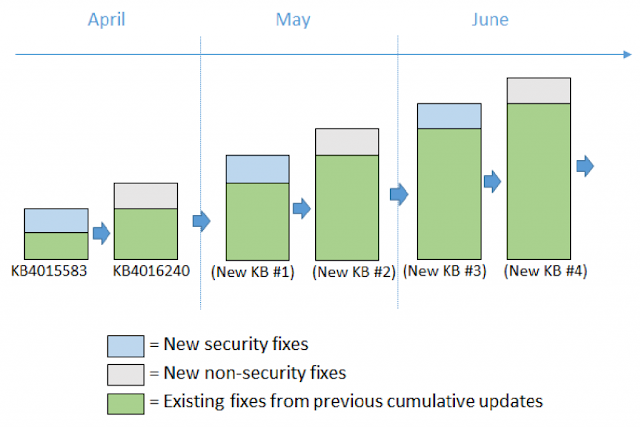 As you can see in April, KB4015583 was released on Patch Tuesday. As soon as more quality improvements were ready to roll out, the software giant shipped KB4016240 a few days ago. Notably, this update wasn’t a security update.
Similar pattern is expected in the next months also, as the First KB of the month which would be due on Patch Tuesday would focus on security and other update later in the month would be focusing on quality updates. The update next month on Patch Tuesday would contain these quality improvements+ Security patches as well.  It is worth mentioning that Microsoft didn’t follow the same servicing model for other versions of the OS.
This means your PC can ask for a reboot more times it usually does, but Creators update allows more control over the updates so that you can pause or snooze a restart as well. This update also affects business users using WSUS but doesn’t affect Windows server 2016 running machines. Businesses might get benefit from it, as the second update if breaks something can be reported in the feedback and Patch Tuesday would be taking care of it.
Share