Finally the day is here. Microsoft has released Windows 10 creators update to all users of Windows 10. For those who don’t know, creators update is next major update to windows 10 after the Anniversary update and it brings many new features as discussed here.
Though the official date which MS has decided to roll out is April 11th, but for seekers who want an early release need to download a tool called the upgrade assistant for a more automated process. Interested users can also download an ISO from the Windows 10 ISO page using some workaround, if they wish.

To get the creators update via upgrade assistant please see the following page:

Just follow the instructions and you are ready to go.

Microsoft has also released the ISO files quietly to the public as well, but it requires some bit of effort to get the ISO. If you get to the software download page through a Windows PC, it only gives the option of downloading the tool that in turns download the ISO- but it brings many disadvantages-the prominent one being no pause or resume of download.
To get the ISO file, we can change the agent in developer tools, so that the page logic sees we are opening it from a non Windows OS. Then we get the option of downloading the ISOs. Here is a more detailed explanation of what needs to be done:
STEP 1:
Open the following page in Microsoft Edge browser:

After the page opens, click F12 to open developer tools and click on Emulation tab . Under user agent string, change it to a non Windows, let us say Apple safari.

You then get an option to download the ISO. Select Windows 10 for home and pro version of the OS. 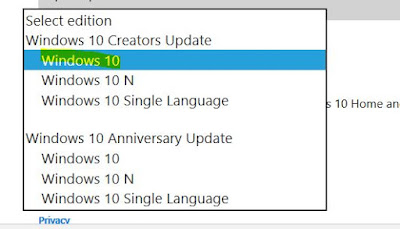 Press confirm and then select the language and edition to Install.

The ISO would be downloaded which can be used to upgrade to the creators update.
Also see:
Share