It is the starting of the month, and Netmarketshare is back with the statistics for the last month aka May. Here is a OS-by-OS analysis:

Windows 7 this month has gained around 1 percent. The OS sits at a share of 49.46% while it had 48.50 percent in April. Windows 7 is the largest OS as per share with a very big margin.

Windows 10, the newest OS of Microsoft also gained this Month, though not a big jump as it is of Windows 7. The OS gained around 0.50 percent and now sits at 26.78 percent as compared to 26.28 percent in April.

The oldest and the most successful OS of Microsoft in the entire history, Windows XP has dropped a considerable amount of share. Now Windows XP sits at 5.66 percent, dropping from 7.04 percent in May.
Microsoft would be quite happy with Windows XP dropping as the OS was dropped support way back in 2014 and more and more users are moving either to Windows 7 or Windows 10. Here is a graphical representation, thanks to Netmarketshare: 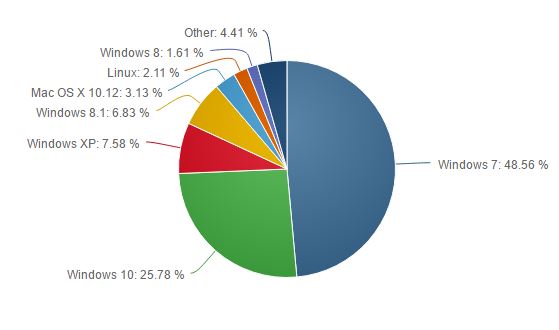