It is the starting of the month and as usual, netmarket share has updated the OS share statistics. We would discuss each OS step by step:

Windows 10 is almost the same

While May recorded Windows 10 to be at 26.78%, the statistics of June show a tiny increment of the share of the OS. The OS sits at 26.80%. Considering Windows 10 as a paid product for everyone, Windows 10 is unlikely to grow at a very large pace from now on.

Windows XP amazingly gained around 1 percent this month. The OS has 6.94 percent of share as compared to 5.66 percent last month. Who uses a 1 and a half decade old OS in todays world of ransomware attacks?
We here present a picture, thanks to Netmarketshare. 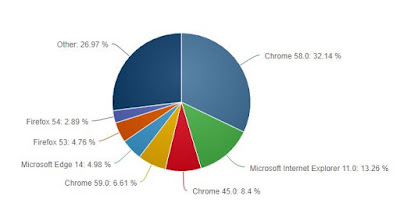