Microsoft, through its testing program for Windows 10 called Windows Insider program allows you to test beta versions of Windows 10. The fast ring-which allows you to see the new Windows 10 build first and get early access to new features is being modified a bit, as said by Dona Sarkar.
Right now, when a feature upgrade stops getting new features(like FCU builds now) the fast ring Insiders or perhaps all the insiders try to fix all the bugs present in the feature upgrade build. The build deemed most stable like 14393 or 15063 is released to the masses. But in a future change from next feature release, a limited number of Fast ring Insiders would be able to test new builds from the next branch(which is RS4_PRERELEASE, for example) and the other insiders would continue to fix builds from current branch.

This was told by Dona Sarkar on Feedback hub. The full statement says:

Dona has also said how the things would go. After Fall Creators update is released to public, all of the fast ring Insiders would get build from same branch.

At some point in the future, build numbers in the RS_PRERELEASE branch will jump ahead, engineering teams will start checking in new code, and things diverge. When this happens – you will not be able to leave Skip Ahead and go back to builds from the RS3_RELEASE branch without reinstalling Windows. Once the Windows 10 Fall Creators Update is released to the general public, this skip ahead option will go away and the Fast ring will be back to receiving builds from the RS_PRERELEASE branch for the next Windows 10 release and inbox app updates from the Store will be fully restored to all Windows Insiders in the Fast and Slow rings.

This is how the settings would look like(Thanks to WinCentral) 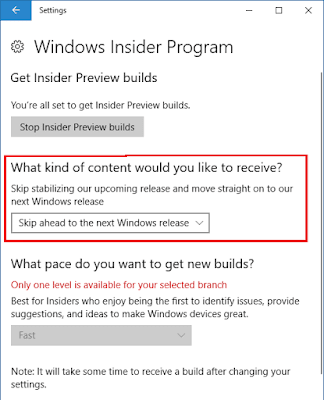 This is for people like who want very early access of the new features-not like me! who are sitting on slow ring and waiting for next stable build to arrive.
Update: Microsoft has closed down the skip ahead feature keeping on what they said earlier- a limited number of Insiders would be permitted. The Windows update settings show: 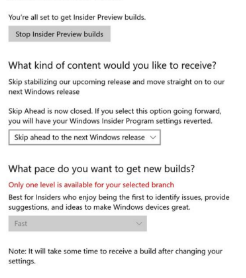