Windows 10 build 16299 gets a cumulative update, signals being RTM for fall Creators update

Microsoft is currently giving final touches to Windows 10 Redstone 3 builds. After releasing many builds consecutively within 2 weeks, the build iteration is currently stopped with 16299 being the last. 16299 was released to fast and slow rings last week and this week Microsoft has shipped a cumulative update that jumps the build number to 16299.15.
Dona Sarkar has also tweeted about this, saying the servicing begins with this cumulative update:

Hey #WindowsInsiders, we have released Build 16299.15 to the Fast ring tonight: https://t.co/ZnsVsQ7BqO

So this makes the fact pretty sure that 16299 is the build which would be released to the public as Fall Creators update. There is no full changelog available yet, but the change that can be seen is the removal of Watermark with the expiry date. I would be updating more as soon as I get the details. 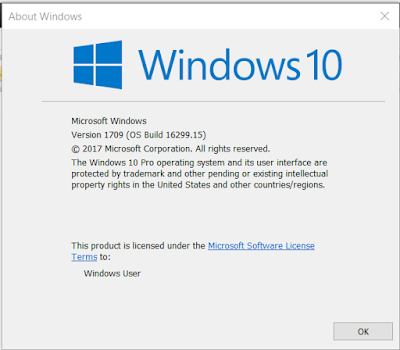