Microsoft started the global rollout of Windows 10 version 1809 aka October update on 2nd October this year. The rollout of the update was first to Insiders in the release preview ring plus Seekers who pressed Check for updates. As soon as the update released, there were reports of users missing files after the upgrade and other bugs too. Seeing the severity of the issue, Microsoft on Friday decided to stop the rollout. The tools to upgrade were also pulled.

Now More details are emerging out of What the issue was. Microsoft in a blog post, explains the reason why the users lost their files.

Now Microsoft has released two cumulative updates, One that jumps the build number to 17763.17 and one to 17763.55. Let us discuss them in detail:

The Cumulative update KB4464330 is for those users who have updated to Redstone 5. The build number after installing update is 17763.55. There are two fixes with the release: 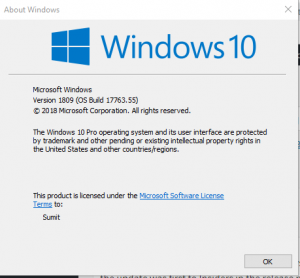 To download this update, you can use the following links:

For Insiders in the Slow ring and Release preview, a separate update is released, which is KB4467228 After this update, the build number jumps to 17763.17, which is less than the one released to the General public. The only reason I can see of this act is, 17763.17 would be released as an ISO file for clean installations which is what Microsoft wants to test if there are any issues.

The download of this update is only available through Windows update.

That is all for now. Other cumulative updates for this month are covered in a separate blog.