Everything about Windows 10 version 1909

With Windows 10, which released in 2015, Microsoft introduced Windows-as-a-service, where instead of releasing a big new release after 2 years, Windows would be continually refined with Feature updates every 6 months. Windows 10 was technically termed as the last version of Windows by Microsoft. The schedule of 2 feature updates continued until early 2019, where Microsoft released the first update of the year called Windows 10 April 2019 update with version number 1903. Technically we should have expected another major release this time around of the year, but this is not the case. The update version 1909 presumably does exist, but it isn’t a big release like the previous 3 years. So for people,  I have prepared an FAQ on this:

What are the new features coming with 1909?

Not something big. There are some improvements like Battery, Performance, etc. Two major features I noticed are the creation of a calendar event from the taskbar and Digital assistant like Alexa on the lock screen.

How much time 1909 would take to Install?

1909 would be distributed more likely as a cumulative update, so it might take around 15-20 minutes to install.

Would there be ISOs available for Windows 10 1909?

Most likely yes after the public release.

Would it be the same for next year-A big 20H1 update and small 20H2 update?

It isn’t cleared by Microsoft if it was a one-off or it would continue in the future. As per my personal capacity, I find this a good idea. Currently, Fast ring Insiders are testing 20H1 builds scheduled to release on April 2020. 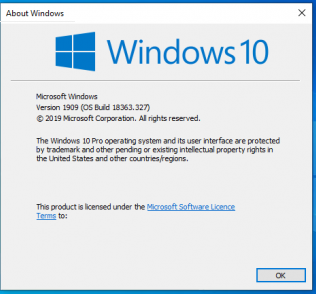