The newest version of Windows 10, called Windows 10 20H2 or the Windows 10 October 2020 update was released some weeks ago. Initially available to a small set of users, the response so far has been good and there are no major problems reported with the same, except for a couple of those. This is likely because Windows 10 version 2004 and Windows 10 20H2 share the same codebase. The difference is the enablement package. This article discusses a known issue – one cannot do a repair install on Windows 10 20H2.

How to fix Repair install not working on Windows 10 20H2

When a user tries to Reinstalls Windows 10 20H2 using the ISO file keeping all the files and applications, better known as repair install, Setup would show Keep apps, files and Settings greyed out. At the bottom, the message would show the following: 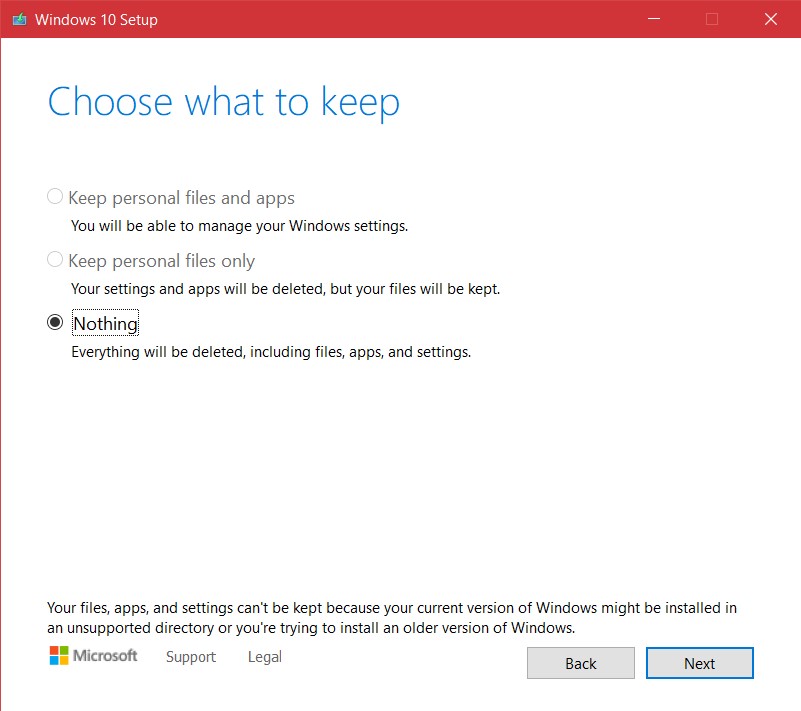 Initially, on hitting the issue, I thought this is because the 20H2 version is Build 19042, while the Setup states version 19041. Later on, my MVP colleague shared with me a solution, which likely indicates there is a bug with Windows 10 20H2. The solution is as follows:

The final values should look like the following. 19041.508 is the Build number.

Restart your PC and run the Media Creation tool again.

Important: The fix is only applicable to Windows 10 version 20H2 Build 19042. Doing this on other releases may lead to PC in an unbootable state.

While it is pretty sure it is a bug, Microsoft is expected to fix this soon. If you are hitting the issue, consider upvoting the Feedback items here and here and add your comments.