Every Windows 10 release like 20H2, 1909 is supported for 18 months since the initial availability. The one that is jumping soon out of the “servicing train” is Windows 10 1909, whose support ends on May 2021. As the end date approaches, the customers on Windows 10 1909 are now being asked by Windows update to update to a supported release, like 2004 or 20H2. For some users, the update automatically is coming through Windows Update, and for some, it is not. For those users who do not see a new update, this article is for you. 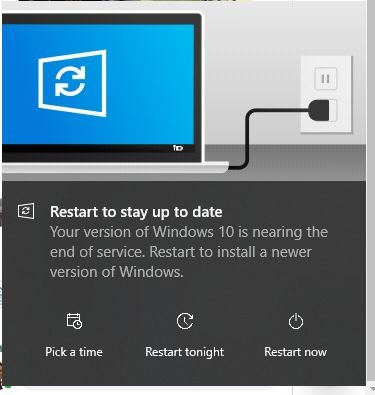 Fix Your version of Windows 10 would reach the end of Service error.

Suppose Windows update Settings for your device says something like, “The Windows 10 May 2020 Update is on its way.  Once it’s ready for your device, you’ll see the update available on this page”. In that case, this means the newer releases of Windows, like version 2004 and 20H2, are not compatible with your device. This incompatibility is likely related to several Audio drivers from Conexant or Conexant ISST, which your device uses. Microsoft says several Conexant drivers have issues with Windows 10 2004/20H2.

From the release health:

Synaptics and Microsoft have found incompatibility issues with certain versions of drivers for Conexant or Synaptics audio devices and Windows 10, version 2004 (the Windows 10 May 2020 Update). Windows 10 devices with affected Conexant or Synaptics audio drivers might receive a stop error with a blue screen during or after updating to Windows 10, version 2004. The affected driver will be named Conexant HDAudio Driver under Sound, video and game controllers in Device Manager and have versions 8.65.47.53, 8.65.56.51, or 8.66.0.0 through 8.66.89.00 for chdrt64.sys or chdrt32.sys.

Synaptics and Microsoft have found incompatibility issues with certain versions of drivers for Conexant ISST audio driver and Windows 10, version 2004 (the Windows 10 May 2020 Update). Windows 10 devices with affected Conexant ISST audio driver might receive an error or experience issues while installing the update or after the device has updated. The affected driver will be named Conexant ISST Audio or Conexant HDAudio Driver under Sound, video and game controllers in Device Manager and have file name uci64a96.dll through uci64a231.dll and a file version of 7.231.3.0 or lower.

So if you have the Conexant HDAudio driver or Conexant ISST Audio driver, you would not be able to update your device.

Update your PC by Downloading an updated Conexant driver

To fix this issue, what you need to do it, ask the PC manufacturer for the updated version of the Audio driver that has the fix.

For example, if you have a Lenovo device, update your drivers from this page(click Detect Product).

If you have an HP device, go here:

If you have a Dell, go here:

If there is an update to the Audio driver, install the same. It is also a good idea to update every device driver to have a smooth experience. Afterward, you can update manually to the newer version of Windows 10.

A generic driver from Conexant is also available with version  7.231.4.0, which you can install on your device.

The manufacturer does not provide new Conexant drivers.

Sadly if your device is an older one, the manufacturer would not provide a new driver. In that case, you need to remove all the Conexant drivers’ instances, use Microsoft generic driver and then try again. 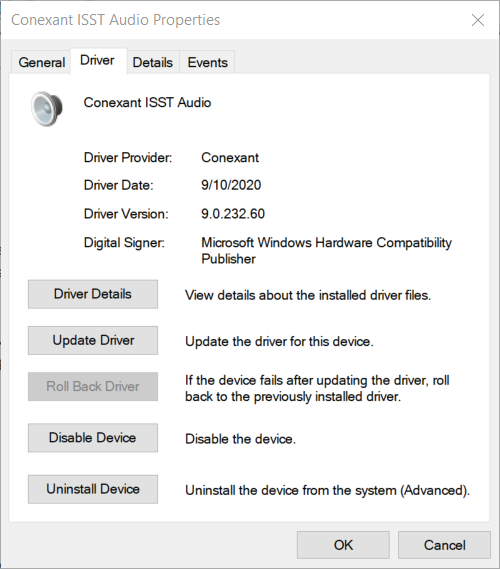 Do not restart the computer.

After removing these drivers, the next step is to try updating manually.

Please download Media Creation Tool from the link below and select Upgrade this PC at the first screen.
https://go.microsoft.com/fwlink/?LinkId=691209

If the update still fails,

Search your C: drive for UCI64*.dll and see if you find any files that match. If so, this means the drivers have not been removed.

After the updates finish installing, Windows would automatically install the audio version for your Audio device, and you should have the Audio as well.

These steps would help you resolve the “Your windows version is reaching the end of service” error.